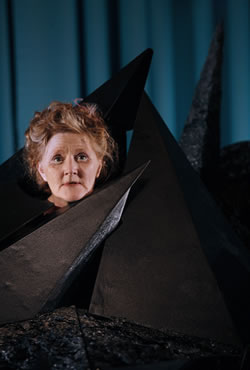 I wanted to put this up last week but a whole bunch of things kept getting in the way.

But now I’ve managed to clear some brain-space I thought I’d dive into the drafts pile and resuscitate this series of thoughts.

It’s a rare opportunity that we get to see Beckett in Melbourne.  Apparently it’s very hard to get bums on seats as soon as his name gets bandied about.

Which raises a series of interesting questions about canon formation and how, despite their cultural authority, certain productions repel people like the plague.

In a way it’s impossible to come at Beckett without sizing up the whole project of modernism. Modernism, whatever else it may be, is synonymous with high art and hence with what is difficult. Joyce, Woolf, Elliot, and Beckett may be as different from each other as chalk and cheese, but taken together they evoke a shared set of aesthetic concerns: a heightened literariness, a desire to experiment with form, and a conscious testing of representation’s limits.

Modernism is not as popular as it used to be.  Cultural tastes seem to have changed.  It’s not just a dumbing down (as is often claimed) of culture; there’s also a generational shift towards pastiche, parody and the postmodern.  My generation (X/Y) would rather watch The Simpsons than wade through The Waste Land. And who’s to say that there’s anything wrong with that?  The modernist fantasy of high culture as distinct from low culture no longer holds water in our in our relativistic, instantaneous 21st century.  There’s gems to be found on Youtube just as there are in musty libraries.  Deadwood anyone?

Which brings me back to Michael Kantor’s production of Happy Days currently playing at the Malthouse.

Happy Days is not as often staged as Beckett’s other long works Waiting for Godot and Endgame.  Perhaps because it is arguably more difficult to perform, watch, understand or enjoy.  I couldn’t help noticing on the night I attended (not that I’m a mind reader) a strong feeling that the audience wanted to like the play but didn’t know how to.

Which begs the question, how are we to enjoy something if we lack the necessary skills to read it, comprehend, interpret it?

There is an essential simplicity to Beckett’s stagecraft (a mound of earth, a crooked tree etc) which allows his plays function on both literal and symbolic levels.  It’s as Beckett cryptically remarked of Waiting for Godot: “If by Godot I had meant God, I would have said God, and not Godot.”

And, for my money, this is where the Malthouse’ production let itself down.  Despite all the clever associations of the set design (the jagged shards of modernity, the apocalypse, the twin-towers etc) I felt that it undermined the performances of Winnie (Julie Forsythe) and Willie (Peter Caroll).  The set was too monumental, drew too much attention to itself, made the setting of the piece too much of a statement, foregrounded Winnie’s condition in such Helvetica twelve-point bold, that it ate into the sheer literalness that Happy Days requires.

And this ties in with my other complaint. In my opinion the Merlyn is too big a theatre to house Happy Days. Why not stage it in an intimate setting? Why not put Beckett in his namesake, the Beckett?  It would have been much more affecting, for example, had I been able to make out Winnie’s facial expressions.  As it was, I had to strain, and even then I couldn’t be sure if she was grimacing, smiling, or doing both at the same time.

Other than that, I think, as has generally been accepted, that this was a commanding performance by two of our most accomplished actors.  I utterly believed Julie Forsythe every step of the way. And Peter Caroll was hilarious though he only had about five lines.

I hope that we get to see more Beckett on the mainstage.  We may even, given a chance, learn to enjoy it.