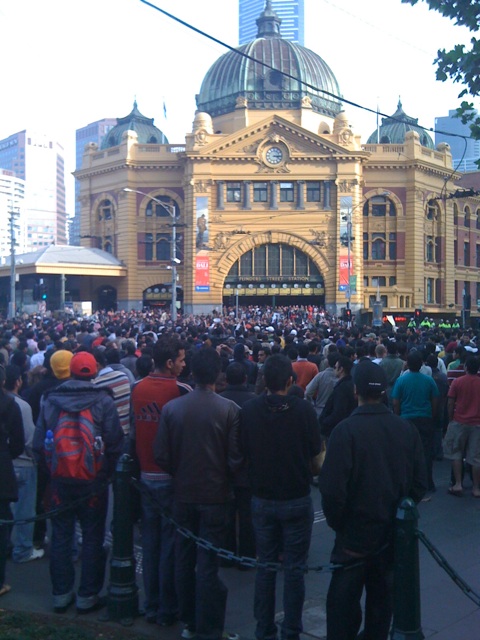 It came as a huge surprise – to the whole of Melbourne  I think – to see the scale of the Indian demonstration at Flinders St on Sunday.

I was in the CBD for the Emerging Writers Festival and was dropping in at Melburnalia 2.  But the protest caught my attention, kept it throughout the day, and has stayed in my mind over the last few days.

What is it about the Indian community?  Why do they exercise their right to protest with such zeal?  Looking beyond the specifics of the situation – the horrific racist attacks and the equally horrific media feeding frenzy – I wanted to try and think through what it is about Indian democracy that distinguishes it from the democracies of say Australia or England or America.

When I was in India a couple of years back with Kel (we travelled all over the subcontinent) we noticed that wherever we went, no matter which state we were in, or which city or town or village, there were always people out in the streets marching, waving banners, blaring through loudspeakers, protesting for one reason or another.

Fruit prices take a hike. Suddenly the banana vendors are teeming up and down the main drag with their trademark wooden barrows. A woman is mistreated by a group of young men and the police turn a blind eye.  Suddenly a whole fraternity of rainbow coloured sari clad women take to the streets.

It was something noticeable, something tangible in the culture.  A refusal to lie down and be kicked in the head.  And India, more than most countries, is the sort of place where corruption and mass inequality can easily breed futulity.

The modern history of India has a large part to play in all of this.  Throwing off the British, the story of Partition, the role played by Gandhi…all are deeply ingrained in the Indian psyche (and too lengthy to discuss here).  John Keay’s India: a History gives a succint account of how it all unfolded.

Which brings me back to Melbourne and the racist bashings in 2009.  If it were only a couple of co-incidental attacks against Indian students there would be no problem.  But the Victorian Police have quietly been keeping track of this for the past 12 months or more; and (as John Birmingham’s recent article explains) there is a longer pattern emerging of racially motivated attacks occuring throughout the western suburbs.  Something clearly needs to be done to address the problem.

Because the Indian community has protested so vocally, it will.  Iit will get done quickly too.  I’m not saying the protesters were all well-behaved little lambs.  Sure, they threw rocks at Flinder St’s stained glass windows.  But for the most part they were a pacifist protest.  And just look at the effect that they (and the media frenzy) has had.  Question Time in parliament house yesterday was almost wholly absorbed with the issue.

I applaud those who are unaffaid to exercise their civic rights.  We in Australia could learn a lot from other countries with a rich tradition of civil disobedience such as India or the USA.  Civil disobedience is not a function of democracy unravelling; it is a part of the dialectic that keeps it healthy.

In recent times in Australia, when we have been unhappy about racial villification, we have responded with riots (Cronulla) and increased villification in return.  We would do well to respond in a more mature fashion.  We too could learn a lot from Gandhi’s example.