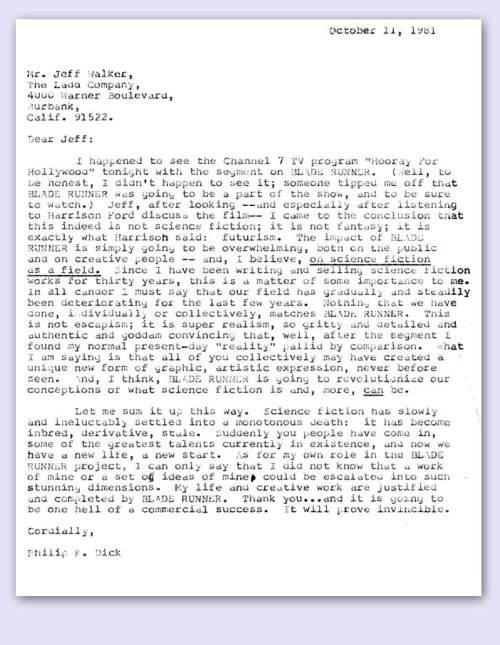 Five months before he died, Philip K. Dick (PKD to obsessive fans such as I) wrote this.

The movie Blade Runner which was adapted from his book Do Androids Dream of Electric Sheep has, as we know, become a classic of modern cinema.

But PKD died a month before the movie was released and never got to see it in full.  It’s important to remember that, apart from being one of the most influential movies of all time, Blade Runner was also a huge commercial flop.  It completely bombed out in the cinemas and it was only through the gradual accumulation of cult status that the movie was saved from the dustbin of history. Which makes PKD’s prediction all the more Nostradamus-like:

The impact of Blade Runner is simply going to be overwhelming, both on the public and on creative people – and I believe, on Science Fiction as a field.

I have for a long time been a compulsive viewer of this movie.

Some people turn to Lord of the Rings. Some to Star Wars. Some to Harry Potter. Some depraved individuals even turn to Willow.

But I have always been a Blade Runner man (and to an equal extent, Alien) and so it was of no small importance to me when I came across PKD’s letter of October 11 1981.

I have to admit, I have read pretty much everything that PKD wrote.  And I still enjoy re-reading his short stories and novels.  Given there is less time to read than there once was, I turn to his shorts more often; somehow in their brevity they seem to contain the zaniness of his philosophy more fully.

Anyhow, I won’t rant about the glory of PKD any longer.  This short clip of a Nexus-6 replicant can do the talking.

This came across my desk this morning (thanks to bureau of information gathering).

The creation of a cyborg insect army has just taken a step closer to reality. A research team at UC  Berkeley recently announced that it has successfully implanted electrodes into a beetle allowing scientists to control the insect’s movements in flight.

“We demonstrated the remote control of insects in free flight via an implantable radioequipped miniature neural stimulating system.”

The research, supported by the Pentagon’s Defense Advanced Research Projects Agency, is part of a broader effort which has been looking specifically at different approaches to implanting micro-mechanical systems into insects in order to control their movements.

Eventually, the mind-controlled insects could be used to “serve as couriers to locations not easily accessible to humans or terrestrial robots,” they note.

Now, I’m not usually one to pander to conspiracy theories on this blog, but this does seems to have the very recognisable imprint of a certain insidious multinational conglomerate out to destroy humankind through robotic devices (otherwise known as Terminators). 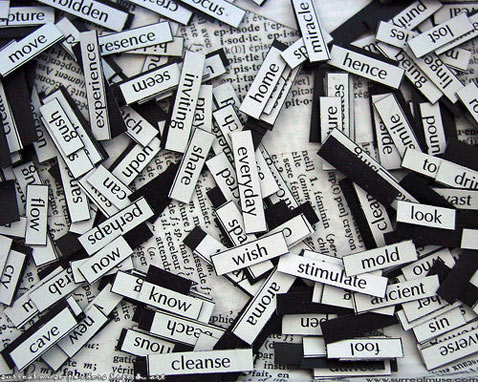 I was at a fantastic play reading last night: Nicki Bloom’s Tender at the Lawler Studio.

Apparently the play has already done the rounds in Sydney and elsewhere.  But we hadn’t seen it in Melbourne yet.  And, seriously, what a talent.  So young too: she wrote Tender at the tender age of 22, I believe.

Anyway, I was chatting with a mate afterwards about theatre and the like, and it got me thinking.

The essential gist of the conversation went like this:

He said he thinks design is the most important factor in theatre today.  I disagreed and said it is (and always has been) the word. Which, to me, seems to sum up a whole raft of debates that have been going on in theatre (post-theatre, devised theatre etc) for quite some time.

Whether we liked it or not, we both agreed that our present culture is more image than text literate.  For better or worse, there is no going back.  Logos has had its day.

However – and this is where it gets tricky – just because we’re better trained to read images now than text, does that mean that image can (or should) replace the word?

Can image ever be the driving force (or structuring principle) in the theatre?   I think not.  I think – and I am aware this is going to make me sound incredibly conservative and more like a 90 than a 27 year old – that theatre, by definition, is about drama. And drama, in turn, is based on the word.

I can already hear people shouting at their computer screens as they read this.  Surely, they are yelling, theatre has always been a combination of word and image?

Which is true, theatre does include image, movement, and so on.  But a case can be made that these things are non-essential.  By which I mean, theatre can exist without such them.  But theatre cannot exist without drama.  A silent play, for example, must still be dramatic.  (I’m thinking of Beckett’s Act Without Words I & II).  Because no matter how cut-up, fragmented, devised, run backwards, undermined, rough, holy, poor, decaffeinated or otherwise, the audience will still interpret and form the raw material into a narrative pattern, in other words, into a drama.

That’s what I mean by drama; it’s not spoken word, or writing on a page, but the very thing that holds it all together.  It’s a structuring principle that we bring into the theatre with us.  No matter how clever the artist, he or she cannot disarm the audience of this faculty.

Now, I’m not saying we should all immediately stop what we are doing and start making neat, clean, old fashioned drama.  On the contrary, a lot of the best of what I see is pushing at the boundaries of drama, is aware and conscious of these constraints, works within them, subverts them, twists them, turns them upside down, empties them out and puts them back again.  But I do see a lot of shows that seemingly fail to notice the very tradition they are working within, the structure they are standing on, and so are often incredibly yawn-worthy; not because they lack edginess or a great design, or slickness, or prettiness, but because they haven’t yet woken up, are still unconscious.  In other words, it’s not yet theatre.

For me, theatre is closer to poetry than anything else.  It can take on, or borrow from, other forms. But it remains, in essence, an activity that a people do with their ears and mouths.

Design will never replace the word.  A great many people may try (and currently are) but the word will remain central.  Because, to remove the word would mean, by definition, that theatre is no longer theatre.

Anything with the word Leviathan in it attracts my attention.

But this, more than perhaps another re-read of Hobbes, has whet my imagination.

Steampunk goes crazy WW1 style.  I don’t care if it’s branded YA: it looks awesome. Bring it on!